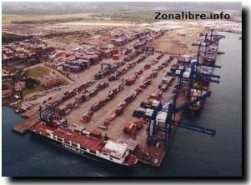 Located one kilometer from the entrance to France Field, the MIT port is administrated by a group of American and Panamanian investors, with investments greater than US$ 300 million.

MIT counts as assets ten overhead cranes, a 37 hectare container yard, 20 additional hectares under development, and 51 hectares available for future development. Today MIT is considered the most modern port in Latin America and moves 70,000 TEUS per month. Its operative standard is more than 30 containers per hour, equaling the movement of ports such as Miami, Kingston, and the Bahamas. The company has 700 employees who work in rotating shifts all 365 days of the year.

This port, operated by the multinational company Evergreen, is located three kilometers from France Field and boasts improved capabilities as a result of a US$ 110 million renovation. Its advanced technology permits the movement of 34 TEUS per hour and the ability to store 400,000 TEUS in its container yard. Currently the Colon Container Terminal has five overhead cranes. Between administrative and operative sectors it has 350 employees generating an efficient and organized movement of cargo.

The firm Panama Ports, subsidiary of Hutchinson Wampoa, manages the administration of two port terminals in Panama, one in the Caribbean and the other in the Pacific. The Cristobal Terminal in the Caribbean is designed to handle loose cargo, general cargo, vehicles, and a future passenger terminal. It has six docks, two overhead Panamax cranes, and four overhead cranes in the yard, a 8.5 hectare container storage area with an annual capacity of 300,000 TEUS, in addition to an automized system CTMS and CCTV.